In 1963, Dave Davidson became one of only a handful of contractor/applicators in the entire country.

“Dave” Davidson was one of the first pioneers in the spray foam industry. As a painting contractor, working at large industrial and chemical facilities, he discovered the future value of polyurethane foam for roofing and wall insulation. 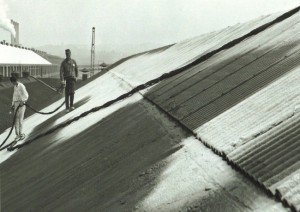 In 1963 he became one of only a handful of contractor/applicators in the entire country. In just a few years he was not only installing polyurethane foam, but was operating a distribution center selling equipment, parts and materials in a five state area.

He was also instrumental in the early development of new spray equipment and parts, consulting directly with Fred Gusmer, the owner and developer of the Gusmer polyurethane foam dispensing equipment.

Posted in History of SprayWorks.

SprayWorks Equipment Group is a business development support and equipment supply company at the center of polyurethanes and the polyurea industry. SprayWorks' team is certified to help businesses like yours and its members have over 100 years of combined spray foam, polyurea, and construction experience.

…(My husband) was able to complete his first job yesterday and I was so proud. I really appreciate all you did for us…
~Crystal V.
Talk to our experts